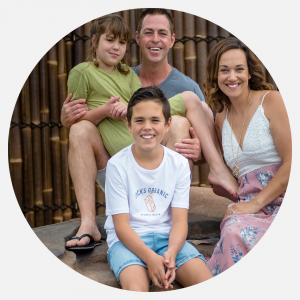 “Imogen loves scooting and going to the skate park. She’s very active. She loves the beach and she can run fast…  really fast! Outings and exercise are so good for her. When she’s been out with carers or her peers, she comes home so much more settled and is more likely to communicate with us.

Imogen who has severe Autism, ADHD and an intellectual disability, was recently caught in COVID-19 cluster at the Autism school she attends and we had to isolate at home for 14 days. It was a nightmarish scenario for our family. Since the beginning of the Pandemic, we’d worried this might happen, and then it did.

Trying to get Imogen to understand the concept of this invisible thing (a virus) is so difficult. She understands the virus could make her sick but how do we explain to her why the rules keep changing.

All the things she loves to do, like going to the shops or on public transport (she’s obsessed with trains) have been taken away from her. She likes to eat fast food as a treat, but can’t understand why she can still have takeaway and not go inside.

Since COVID, she’s been saying: ‘Oh Immy. Everything’s  closed. Oh COVID is sad.’  Hearing her say this breaks my heart, and I worry what the Pandemic is doing to our kids.

COVID testing is traumatic for Imogen. We call it a tickle test.  The first time she got it was a novelty (she got a treat afterwards). The second time she screamed the whole way: ‘No tickle test, no tickle test’ and tried to get out of the car while we were driving.

The two weeks isolating were tough. Imogen would throw herself at the screen door and cry, not understanding why she couldn’t go outside.

Our village really rallied and friends sent us gifts and message of support (donut packs, balloons, Kmart orders of craft and activities). Everyday something arrived at our front door, and sometimes just at the moment that she was becoming dysregulated. So it was a welcome distraction and helped get us through a really challenging period for our family.

However, the entire experience has taken a toll on our stress levels and I know it did for other families, many of whom were only hanging on by a thread.

I run a support space for families with specials needs children/adults called Thrive Tribe & Co. We did a retreat for a group of mums not that long ago and I had to request medical information. I was not at all surprised to learn that almost all of these women have some sort of chronic health condition or lifestyle disease. I myself have multiple sclerosis.

A few years ago I posted a piece to camera of my reaction to some alarming statistics on the health of mothers who have children with Autism or an intellectual disability. My Facebook post went viral.

If we don’t take care of parents or carer’s mental or physical health who’s going to look after the kids? Respite is not a luxury for these families, it’s a necessity.

So yes community access for Imogen and for families like mine is a must. Community access gives Imogen regular contact with people and a chance to develop her social skills. It’s hard for Imogen to make and maintain friendships. Just because she has Autism, doesn’t means she has no social needs.

More importantly, it gives the community a chance to desensitise to people with a disability. Children like Imogen should absolutely be seen out and about accessing the community and our community should be understanding of their differences and needs.

We do separate holidays because a holiday with Imogen is a holiday for Imogen and it’s not a holiday for us. We have taken our son to Thailand. People were shocked we weren’t taking Imogen but it’s not her type of holiday. She likes to do the same thing each day, she likes safe things around her. And Cooper loves to travel and explore. Finding the balance between having both our children’s needs met is tricky.

We take Imogen to my Aunt’s house on a property in the bush and Imogen loves it there – she can swim in the dam and run around to her heart’s content. When she’s in nature she is so much more settled. We sometimes go away for short trips in our caravan. They have to be short trips though, and often we will take my mum and dad with us as backup.

You have to plan 100 steps ahead as you just don’t know what will catch Imogen’s attention or could be a trigger. I’m constantly trying to anticipate what she will think and do.

We went tenpin bowling with my best friend’s family (her safe people) and the preparation involved was extraordinary. We did visuals to explain it was going to be loud and noisy, and talked about how we would take turns bowling the ball etc.

You can plan for everything but of course there are things you cannot plan for. . .  So when we got to the bowling alley, she ran into the arcade area, but didn’t understand she needed to redeem tickets to get a prize – she wanted to buy the prize. To her, it just looked like a shop.

If we had a carer come bowling with us then we could just be Imogen’s parents and enjoy the experience alongside her. I wouldn’t have to constantly be watching her and worried she will run away to whatever catches her attention in the moment.

I am reluctant to buy tickets to experiences because sometimes we can turn up and Imogen decides she doesn’t want to go inside. We took her to a Wiggles concert once. I got front row tickets but when we got there she wanted to sit in another area and tried to get through different doors and proceeded to have a 45-minute meltdown.

The staff were amazing (one of them also had a child with Autism) and arranged new seats for us at the back of the auditorium. But ordinarily we would have left and that would have been money thrown out the window.

Getting tickets and accessing the community in this way make us think that someone cares. And tickets would be great for siblings. My son Cooper is footy-mad so when Immy had one of the What Ability carers Tevita Masima (Parramatta Eels player) come to our house, my son was completely star-struck!

If we could go to the football as a family – that we wouldn’t normally access – it would  be amazing. I think it’s something Immy might enjoy too!