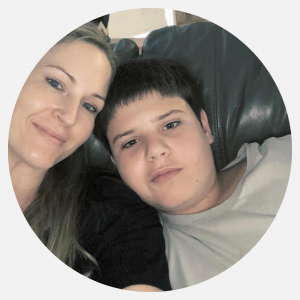 “Dylan is 15 years old and has limited speech. He sits at the severe end of the Autism spectrum. He has epilepsy as well an intellectual disability along with dormant Kawasaki disease. He’s lucky enough to be in a very supportive Autism School where he’s been going since he was four years old.

Dylan thrives on routine and loves being outdoors. He’s a strong and very tall at 6’1. When Dylan is having a meltdown he can destroy anything in his path. We’ve had holes kicked and punched in walls, glass panels smashed and many TVs and iPads broken. Dylan’s behaviors typically kick in when he’s housebound. He will lash out at his sisters, Jade and Ava and it’s almost impossible to have friends and family over for celebrations as Dylan will take over the TV and not allow us to watch anything apart from the Simpsons or his favourite shows on repeat. It gets very draining.

Dylan is happiest when he’s outdoors. He needs to keep moving. When Dylan gets home from school, he instantly asks to go out again. If there’s no activities for him on a weekend, his whole demeanour changes.

You can see the anxiety on his face as he realises he has to be at home with mum and dad and his sisters. We dread rainy days and school holidays are always hard.

We can usually sense when a meltdown is coming (little noises and tics are his tell-tale signs) and we can nip it in the bud before it happens but the need for constant activity and exercise and having to anticipate Dylan’s needs is exhausting.

Dylan’s sisters find it difficult to have friends over when Dylan is home as he can embarrass them with his loud vocal noises or by banging things. These friends are sometimes scared of Dylan who will go up to them to try and interact. His physical size can be intimidating and he has little concept of personal space. It’s harder for Ava who is youngest and still doesn’t really understand why our lives revolve so much around Dylan.

We do bend over backwards to try and ensure our girls don’t miss out – they play sport, attend sleepovers and do all the things typical of their age bracket. I would hate to say to them: ‘No you can’t do that because of your brother!’ We try and make it work and mostly it does.

I myself have a sister with Autism so I know how hard being a sibling can be particularly in those teenage years. However, our daughter Jade is amazing with him. She will often say: ‘Come on Dylan, let’s go for a walk’. We  are lucky that we live near a golf course and we are close to the beach so there are lots of open spaces for him.

Over the years our family has tried to have little getaways while Dylan is in respite or away on school camp. We have attempted a few holidays with Dylan and we always come back more exhausted because trying to keep him safe and entertained with his favourite things is always extremely hard. There is only so much swimming at the beach you can do in one day to keep him happy.

To get a night out with my husband takes weeks of planning.  We can never be spontaneous. I have to either book overnight respite in months in advance or tee up a support worker or family to drive down from the Central Coast to mind Dylan. My husband and I will often just go out separately so we get to have a break. Our NDIS funds need to be budgeted and monitored very closely. We are grateful to have this funding however we find it only covers the basics for Dylan. He loves being out in the community with his peers and to do this every day, our plan would be gone in a flash.

My mental and physical health is pretty good. I work part-time and I try and keep physically active but with lockdown and stay at home orders here in Sydney it’s been particularly hard.

The unthinkable happened this year when we all got COVID. I used to worry that it would be myself or my husband Matt who would bring it home. I never imagined it would be Dylan. He came into contact with the virus when a child in his class at the Autism school he attends caught the Delta strain from a carer. Dylan had been tired and lethargic and my mother’s instinct told me that he had it but it took a while until he tested positive. The waiting was torturous as we didn’t know who in our family would be next or how seriously sick we would become.

Dylan ended up going to Westmead Children’s Hospital for the last few days he was positive and then to a respite group home as by then we were ourselves positive and unable to care for him. We would Facetime Dylan while he was in hospital and it was heartbreaking as he looked so scared and confused.  All the staff were in PPE gear and he was away from his family.

Our worry was if Dylan had stayed home while we were sick, he’d get frustrated and lash out. We knew that once Dylan was well and his energy levels had returned, he would want to go back into the community and this just wasn’t an option while we were still contagious. My husband Matt was the last to get COVID and spent 12 days in hospital. I lived on adrenaline for those few weeks. Amazingly, we got through it all but to this day I experience brain fog, fatigue and have lost my sense of smell.

To have access to the community via an organisation like What Ability certainly takes some pressure off those NDIS funding gaps and allows Dylan to participate more regularly in activities he loves such as swimming, going on ferry rides, bushwalking and having a BBQ. The Foundation sounds amazing. I feel special needs families often miss out.There certainly needs to be more support and opportunities for recreation and respite for families like ours because without it we burn out.

We all want to be able to care for our children at home for as long as we can. When we get regular downtime from caring for Dylan, we are recharged and can care for him with big smiles on our faces, and with the energy and enthusiasm he deserves.

Dylan is so much happier after he’s been out with What Ability support workers. They really treat him like a friend. The interactions between Dylan and his carers are so heart-warming, the smile on Dylan’s face when he knows he’s going out on a What Ability adventure is huge. ”